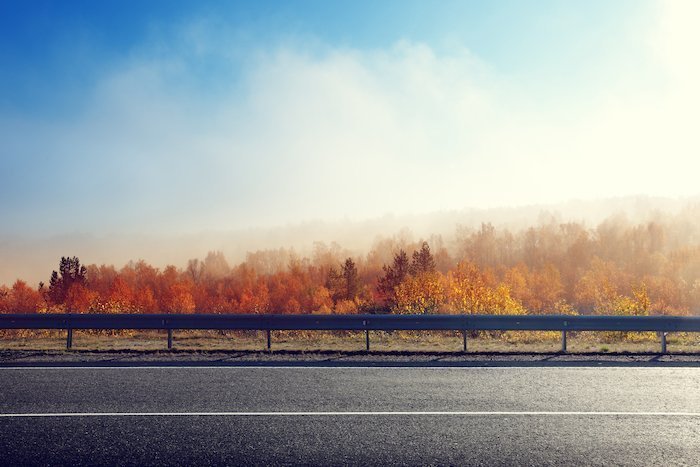 It was late October and the orange leaves had started to fall when our minivan jumped over a highway guardrail and hit a concrete pole at 75 miles per hour. We had been at a wedding the night before, and I had danced all night, at one point even dancing with the maid of honor. I hope she really looked at me. I hope she took in every contour of my face- my cheekbones, thin lips and thick eyebrows, and clear eyes. It was the last dance I’d have as that version of myself.

They never tell you how blurry the hospital will really be. My first, hazy memories after the car crash are a bricolage of colors, faces, and frenzy. I remember friends around my bed, holding my hands, their worried expressions telling me how bad I was really doing. Paramedics, blood bags and IV fluids, EKG monitors with a whining beep, smearing around me like hallucinogenic impressionism. I was told that I “woke up” multiple times with no idea of where I was, asking what had happened, if anyone else in the car had been hurt, and repeating the same joke over and over: “My teeth feel like they’re in different zip codes.” From my hospital bed, I could see the forest preserve, full of orange and red trees.

My parents played me the voicemail I had left them after the crash, telling them about what had happened. In it, you can hear my voice, thick with morphine, slurring around my fractured upper jaw. It felt like someone else. It was a stranger telling them “I’m hurt pretty bad,” and asking them to come up from Florida as soon as possible. They didn’t hear the details- 6 facial fractures, a reconstructive surgery inserting five metal plates into the right side of my face, jaw wired shut for weeks while I’d be fed through a straw. They didn’t need to hear the details. They got on a flight that night.

It’s a strange thing- I am at the center of this trauma, and yet I understand so little of what occurred around me. The most important things happened without me. My parents faced the man who veered off the highway with six passengers, all because he was looking at his wife’s phone. I wonder what it felt like to look this man in the eye, a man who almost killed your only son. My best friends walking into my hospital room and seeing me, nearly lifeless, propped up in a hospital bed with an unsolved jigsaw puzzle of broken bone underneath the surface of my skin. I saw a photo of what I looked like in that bed. Me, the exaggerated, dramatic, attention-seeking person that I am, looking stuck somewhere between sleep and death. That hospital stay was harder on everyone around me than it was on me. I barely remember it, but I know those people might not ever forget it.

Sometimes, I wish the crash had more malice, or even more sense to it. By a random strike of fate, I was the one closest to the concrete pole we hit. It could have been anyone else. One of the other passengers wasn’t even wearing a seat belt and walked away with only a concussion. But there is no sense to it. There is no evil genius pulling strings, no fate. At the center of my near-death experience is the driver- a small, aging man with yellowed teeth and an untrimmed, greying beard. I saw him for the first time since the hospital a few weeks ago. He said hello, gave me a smile, cracked a few bad jokes, and fell asleep with his head on the kitchen counter while me and my friends helped his son move apartments. In the end, I’m not angry at him, I’m sad for him. I don’t think he grew from this. I made my parents swear we wouldn’t sue him, said that his family didn’t deserve it, and I worry that it let him walk away from this accident and simply forget it, or at least try to. But I’ll never walk away from it. Some part of me will always be in that grassy field next to the highway, laying on my back staring up at the sky while my friends wailed around me and called an ambulance. Some part will never leave that hospital bed, the IV in my arm tethering me to the past. When he smiles at me, I remember the truth: he is a key part of these moments, and so he will never leave me either. I feel that I have already left him. He has chosen to forget, while I don’t have the luxury of that choice.

With time, the crash has grown ever smaller in my personality and thoughts, but I know it will stay in me, a hard little kernel reminding me of what I’ve been through. The metal just under the surface of my skin guarantees that- the plates will never come out, and running your fingers over my cheek you can feel each individual screw that’s drilled into my bone. It’s fun at parties, everyone jumps at the opportunity to feel my face when I offer it to them.

I’ve read that trauma is called a “failed experience.” The person who suffers the trauma can’t wrap their minds around it, they can’t make sense of the things that have occurred to them, and so they haven’t fully experienced it in their minds. Yet, at the same time, they relive the experience constantly, perpetually trapped in a paradox between never leaving that moment and never experiencing it at all.

I crawled out of that minivan, but I’ll forever be inside it, and it will forever be inside me. With the passage of time though, the re-experience softens, then broadens. There’s more than just hospitals and concrete poles, there’s the dance I shared with the maid of honor. There’s the hike before the wedding, isolated in a state park surrounded by that fall’s foliage. I hope the maid of honor remembers my face, though hers has become faded in my memory. I hope I always remember the orange leaves, and the quiet moments I spent looking out at them, dreaming of quiet walks and a hopeful future.

Pedro Escobar is a writer and content strategist for Pithy Wordsmithery.