A premier news magazine targeted at publishers, librarians, booksellers, and literary agents, Publishers Weekly is one of the most competitive publications for book reviews. Of the hundreds of self-published titles received each month, only a handful of the very best are selected for review. On October 16th, 2017, PW featured The Disruptors’ Feast by Frits van Paasschen: 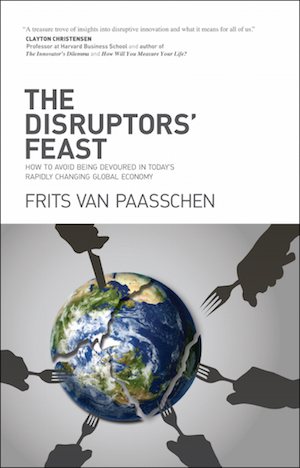 “The world is changing—and many once-successful businesspeople are getting left behind, asserts van Paasschen, former CEO of Starwood Hotels and Resorts, in this manifesto. The only constant in the modern world, he writes, is change; van Paasschen identifies this phenomenon by the popular term the “great acceleration,” a process primarily powered by digital technology and specifically by the ability to exchange information worldwide. He warns that success or failure now depends on how one handles the great acceleration, and that many are too slow to adjust their business philosophies to this rapid pace of change. Using examples from his own career, such as business trips to the Middle East where he witnessed early glimmerings of the Arab Spring, van Paasschen identifies various drivers of change: urbanization, sociopolitical volatility, and so on. Van Paasschen’s advice for how to keep up with the speed of change—learn to overcome cognitive bias, become agile, and think past obstacles—don’t break new ground on a fairly well-covered topic, though his points are solid and the descriptions of the positive and negative outcomes of the great acceleration are thought-provoking.”